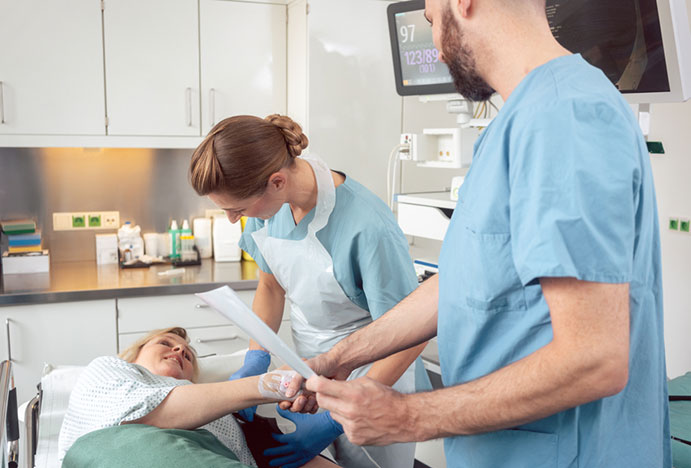 Having performed well over 5,000 colonoscopies in my career, I have heard every excuse and fear about the procedure.  So I’ve decided to take my doctor’s coat off, put my stethoscope down, and give you some “real” talk about the fears I hear from my patients, and what the real truth is when it comes to getting your first colonoscopy:

This is definitely the #1 fear I hear from people facing their first colonoscopy.  People are worried that they’ll experience pain or have bleeding or post-procedure effects.

Let me just put that fear to rest:  there is NOTHING about a colonoscopy that will hurt.  NOTHING. First of all, the majority of our patients elect to have IV sedation, which means you won’t even be awake or remember the procedure.  IV sedation is a wonderful thing - you’re asleep during the procedure, and then as soon as the IV medicine is stopped after the procedure, you wake up - no hangover, no nausea, and no memory of what just happened! The IV is placed in the holding area before the procedure and this is the most uncomfortable part of the day.

Most patients have no pain or bleeding or any lingering effects after the procedure (other than a little excess gas) and are able to leave the office and go and eat breakfast on their way home. There is no driving until the day after the procedure.

#2:  I’m so uncomfortable and embarrassed and squeamish about me showing my backside to a room full of strangers.  It just seems like such a violation.

I can understand this fear, as it is a loss of control and we are performing a procedure in a very private area. But just as a reminder, we do this day in and day out and take every effort to protect your modesty by keeping you covered until the last minute and only exposing what we need to expose.   So the good news is, you’ll never even know what happened, and you’ll be fully covered until you’re asleep. Everyone in that room is way more focused on your inside - NOT your outside.

#3 - I’m terrified about what you might find - I just KNOW you’re going to find cancer!

The fear of “what if you find something” is very common. I flip it around and say that if something is there, it needs to be found! I look at a colonoscopy not just as a diagnostic procedure but a preventative one as well. By removing polyps before they turn into cancer, you are preventing future problems. Polyps are removed at the time of your procedure and most of the time you have no after effects of doing this.

The take-home point is that it is much better to find polyps which can be removed or early cancer which can often be cured, rather than advanced cancer.

#4 - I’ve heard the prep work prior to colonoscopy to get me “cleaned out” is horrible!  I have an easily triggered gag reflex, so I just know I’m going to have a hard time with it.

Many facilities that conduct colonoscopies prescribe a prep that involves over a gallon of liquid you have to drink in a short period of time.  The good news is, we rarely utilize the infamous gallon prep here at Alabama Colon and Rectal Institute.

Instead, we use a low-volume prep that for most patients is ½ gallon of a liquid of their choice, most commonly Gatorade but any clear liquid is OK. By utilizing a drink of the patient’s choice, it is much more palatable than in the past. For most patients, the prep is not as bad as they thought it was going to be. The worst part is just having to be near to a commode for several hours. The most common complaint is nausea or vomiting, which can often be alleviated by slowing down the pace with which the prep is being consumed.

So I hope this frank discussion from a physician who knows all the fears associated with a colonoscopy has helped you in some way.  The best advice I can give you: go ahead and schedule that first colonoscopy when you turn 50.  You will be so proud of yourself that you went ahead and got it out of the way - AND I’m willing to bet you will say to me what the large majority of my first-time patients say to me:  “That was nothing, and I don’t know what I was so afraid of!”

Alabama Colon & Rectal Institute (also known as the “Butt Hut” around town!) has been in practice since 1990 as a free-standing, private practice located in downtown Birmingham, Alabama.  We are known for our efficiency and patient care, in a more relaxed office-based setting.  Our doctors are known regionally for their expertise and are active in teaching surgical residents and other physicians.  We are also a major sponsor of The Rumpshaker 5K, a race that promotes awareness about colorectal cancer.  Check out our website for more information, or give us a call to make an appointment at (205) 458-5000, or email us at [email protected].

Meet Our Staff Our History